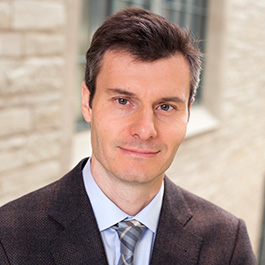 As a child, Vadim Backman wanted to become a physician to help people. Now he is a biomedical engineer on the cusp of commercializing a technology that could reduce cancer deaths by 90 percent.

“The advantage of nanocytology -- and why we are so excited about it -- is we don’t need to wait for a tumor to develop to detect cancer,” Backman said.

The PWS-based test makes use of the “field effect,” a biological phenomenon in which cells located some distance from the malignant or pre-malignant tumor undergo molecular and other changes.

In 2011, Backman and his team founded Preora Diagnostics. The PWS technology and the company were born as a result of ongoing research at Backman’s Biophotonics Laboratory at Northwestern.

The nascent medical device company is dedicated to designing highly accurate, low-cost, non-invasive testing that will dramatically help with the early detection of several types of cancers.

“Early cancer detection saves lives,” Backman said. “Cervical cancer is a great example. It used to be the number one cancer in the United States. And right now cervical cancer is number 14 on the list. We didn’t come up with a magical drug. What we learned how to do is to do a Pap smear.”

The PWS technique has shown promising results in the early detection of colon, pancreatic, ovarian and lung cancers.

“No one has ever been so close to making such a significant dent on cancer mortality,” Backman said.