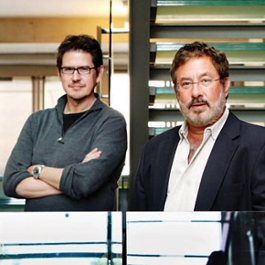 Seven years ago, computer scientists Kristian Hammond and Larry Birnbaum co-founded Narrative Science, a startup company that uses artificial intelligence to extract the most important information from a data source and turn it into a narrative expressed in natural language.

Quill, the company’s patented underlying technology, helps organizations and companies more easily understand their data by turning it into a customized written story, about, for example, last night’s baseball game or an investment portfolio review.

Blending artificial intelligence and journalism, Quill generates news stories, business reports, tweets, texts, snippets and other kinds of text content purely from the analysis of data. The technology can produce editorial content in areas such as sports, finance, real estate and politics as well as business reports with information and insights gleaned from sales, operations or market research data.

“With the rise of big data, all this data is being gathered and analyzed, and we need to convey it to people in a way that’s meaningful to them,” said Birnbaum, chief scientific advisor for Narrative Science. “Our technology has potentially very high value, very broad applicability.”

Quill resulted from an interdisciplinary course taught by Birnbaum and Hammond at the Medill School of Journalism, Media, Integrated Marketing Communications and their collaboration with computer science students and journalism students.

The two professors worked with a project team to develop a prototype of a technology that automatically generated editorial content from data. One of the first stories was about a Northwestern Wildcats baseball game -- generated entirely from the game’s box score and play-by-play information.

“When you’re an engineer, you need to build things for people to use,” said Hammond, chief scientist for the company. “It’s not just about what the computer can do. It’s about what it can do to help us do things better, faster and smarter.”

The work that gave rise to Narrative Science is a prime example of the power of Northwestern’s CS+X approach to using computers and computational thinking as transformational tools for change.

Based in Chicago, Narrative Science is a leader in Advanced Natural Language Generation. The New York Times, Wired and Business Insider have featured coverage of the company, and it received a 2011 Chicago Innovation Award.