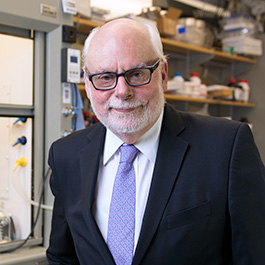 Sir Fraser Stoddart has discovered how to make gold green. A few years ago, the well-known chemist and members of his research team discovered in the lab an inexpensive and environmentally benign method that uses a naturally occurring compound called cyclodextrin, a sugar derived from cornstarch — instead of cyanide — to isolate gold from raw materials in a selective manner.

The green method extracts gold from crude sources and leaves behind other metals, such as copper and iron, that are often found mixed together with the crude gold. The process also can be used to extract gold from consumer electronic waste.

“The elimination of cyanide from the gold industry is of the utmost importance environmentally,” said Stoddart, who received the 2016 Nobel Prize in Chemistry. “We have replaced nasty reagents with a cheap, biologically friendly material derived from starch.”

Stoddart co-founded the startup Cycladex in 2014 to develop this commercially promising serendipitous discovery, and he is the company’s chief scientific officer. Cycladex has generated interest worldwide and is working closely with Comstock Mines in Nevada, one of the world’s oldest goldmines, where the cyanide process is believed to have been used for the first-time on a commercial scale.

Current methods for gold recovery all around the world involve the use of the highly poisonous sodium cyanide, often leading to contamination of the environment. Nearly all gold-mining companies worldwide use this toxic gold-leaching process to sequester the precious metal.

With the softening of the price of gold, mining companies are under continuing pressure to reduce their cost of operation and also reduce the capital required to develop new opportunities. Cycladex now has developed an inexpensive process based on Stoddart’s initial discovery that will reduce operating costs by approximately 30 to 50 percent and capital costs by 35 to 50 percent. The process has been evaluated in 15 mines worldwide and shown to work in all of them.

The new process uses salt, some acid and an oxidant to prepare an aqueous solution of the gold, which, when treated with the cyclodextrin, yields a precipitate within minutes.  This use of green chemicals has eliminated the need to use expensive and toxic sodium cyanide.