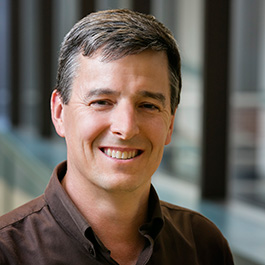 Under the direction of John A. Rogers, a Northwestern research team recently developed a first-of-its-kind soft, flexible microfluidic device that easily adheres to the skin and measures the wearer’s sweat to show how his or her body is responding to exercise.

“The intimate skin interface created by this wearable, skin-like microfluidic system enables new measurement capabilities not possible with the kinds of absorbent pads and sponges currently used in sweat collection and analysis,” said Rogers, the Louis Simpson and Kimberly Querrey Professor of Materials Science and Engineering, Biomedical Engineering and Neurological Surgery in the McCormick School of Engineering and Northwestern University Feinberg School of Medicine. “We use colorimetric chemical reagents that are responsive to key biomarkers and collections of valves that route the sweat into collections of associated microreservoirs for analysis.”

The revolutionary stretchable electronics that Rogers and his team developed laid the technological groundwork for MC10, a Lexington, Massachusetts-based wearable healthcare technology and devices company that Rogers co-founded in 2008. With Rogers’ technological developments serving as MC10’s guidepost, it now employs an extraordinary multidisciplinary team united around the common goal of using technology to improve human health.

The development of this type of passive, colorimetric sweat-monitoring patch, also known as the “lab on a skin” in Rogers’ lab, is just the beginning. Rogers said the electronics he and his team will integrate in the future will allow on-board data logging, wireless interfaces to the phone and expanded measurement functionality.

“These will include electrochemical measurements of additional biomarker content in sweat directly, to expand the range of chemistries that can be sensed,” Rogers said.

Even further into the future (10 to 20 years), Rogers said he and his team see opportunities in a more dramatic blurring of the distinction between man-made devices and the human body, where the technology is not only biocompatible and “skin-like” in the physical/chemical properties but where the boundaries between the devices and the skin themselves are diffuse and the devices not only sense but also deliver therapies to promote healing, in a closed feedback loop working in coordination with natural body processes.

Current research focuses on soft materials for conformal electronics, nanophotonic structures, microfluidic devices and microelectromechanical systems, all with an emphasis on bio-inspired and bio-integrated technologies. These efforts are highly multidisciplinary and combine expertise from nearly every traditional field of technical study.