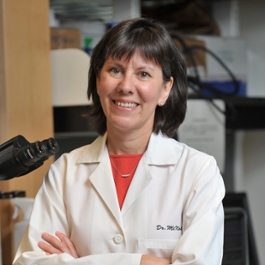 Dr. Elizabeth McNally is a leading scientist in the genetics of rare diseases including cardiomyopathies and neuromuscular diseases like muscular dystrophy.  These diseases affect children and young adults causing muscle weakness and heart failure.

McNally, director of the Center for Genetic Medicine at Northwestern University Feinberg School of Medicine, and her team mapped genetic modifiers for muscular dystrophy.  Her group identified latent TGFb binding protein 4 (LTBP4) as a modifier of muscular dystrophy, which modifies muscle breakdown in humans with Duchenne Muscular Dystrophy.  She is now working collaboratively with Solid Biosciences to develop antibodies to stabilize LTBP4 and increase its ability to neutralize myostatin and TGFb.

“When we set out to map genetic modifiers more than a decade ago, it was viewed as very high risk,” McNally said. “We got a big pay-off in finding LTBP4, and its genetic signature that pointed directly to path we could develop for therapy.”

Originally developed to treat Duchenne Muscular Dystrophy, exon skipping coaxes cells to “skip” over abnormal sections of the genetic code, so that the body can make a functional protein, which in this case, governs muscle function and development.

McNally, also the Elizabeth J. Ward Professor of Genetic Medicine, and her team demonstrated that a protein made from exon skipping worked to stabilize and slow progress of the disease.

“We recognize that this is version 1.0,” McNally said. “But if this can stabilize individuals with this disease, even if it gave them 10 more years of walking, that’s huge. That means 20 to 30 more years of breathing. And, of course, we’re interested in developing version 2.0 that will be even better.”

In other research, McNally showed that weekly doses of glucocorticoid steroids, such as prednisone and deflazacort, repaired muscles damaged by muscular dystrophy and helped speed recovery in muscle injuries.

The studies were conducted in mice, with implications for humans.

One of the major problems with steroid drugs like prednisone is they cause muscle wasting and weakness when taken long term. This is a significant problem for people who take steroids for many chronic conditions.

But the new study showed weekly doses — rather than daily ones — promote muscle repair.

“We don’t have human data yet, but these findings strongly suggest some alternative ways of giving a very theses drug in a manner that doesn’t harm, but in fact helps muscle,” McNally said.

For the study, McNally and colleagues used high-resolution imaging to view the muscle’s ability to repair itself. This technique relies on a laser to disrupt muscle cells. The muscle cell is then observed in real time as it reseals the hole, a natural repair process. Using this method, her team found the muscle healed faster when steroids were present.

They also studied mice with injury to their muscles and noticed the mice receiving the steroids recovered more rapidly from injury.

“We showed steroid treatment, when given weekly, improves muscle performance,” McNally said.  “We’re excited to test this in humans with muscle diseases since it could really change their outcome.”